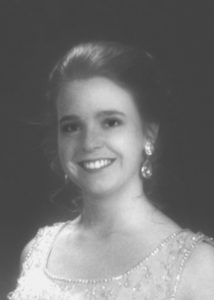 Alison Williams’ parents raised their daughter to be colorblind. So it was no wonder that as the newly elected 17-year-old student body president of Hernando High School, she questioned the race-based student election system that began during integration in 1970.

Freshmen, sophomore and junior classes elected co-presidents – a black student and a white student for each class – as a way to give representation to black and white students. The high school also had two principals – one black and one white. The common response was, “That’s just the way we do it here.”

“Race relations are good, so why does the school need this system?” Alison wondered.

She spoke up about this policy at a DeSoto County School Board meeting in May 1997. The school board quickly dismissed Alison’s question, but they couldn’t dismiss her conviction. She believed that the student body should be able to vote for student council representatives based on individual merit and the individual’s desire to run and serve. She decided to fight to the end.

With assistance from a local parents group, Alison and her parents persuaded the civil rights division of the U.S. Department of Education to investigate. As the investigation became publicized, Alison began losing friends at school. One teacher told her she was disappointed in her. Eventually the national media approached her – the Associated Press, Good Morning America, CNN, and 20/20.

A petition to have her impeached was started by a teacher and a few former friends. However, on June 2, 1997, the DeSoto County School Board announced that there would be no ethnicity requirements on any activity at Hernando High School. A month later, it became a countywide change. And she learned that the next year, there would be only one principal at the school.

Alison is now a senior and is thankful for the friends who stood by her in her fight. Alison has said that if she could go back, she would do it all over again. She is what we call people who challenge accepted practice and spark important debate about unpopular causes – a hero.

Alison completed high school out-of-state and is a straight-A student in criminal justice at Northwest Mississippi Community College. She works for the Sheriff’s Department and raises and trains horses.