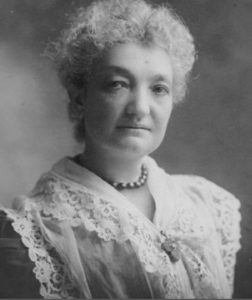 Less than a year after her birth near Genoa, Italy, in 1849, Mary Magdalene Solari was brought to Memphis by her parents. She went on to leave a legacy of artistic, civic and philanthropic achievements that still enrich our lives here and abroad – more than 150 years later.

Mary’s first art teacher was Mrs. Morgan at the Memphis Female Institute. Mary studied with her until 1882 when she left for Florence, Italy, for her health and to study under Casioli. Traveling abroad as a young woman was extremely uncommon during this time, but Mary knew the importance of this transition. The opportunity to study under a well-known artist would prove to be of personal as well as historical significance.

After only a short period of study, Casioli took notice of Mary’s undeniable talent and encouraged her to enter her works to the Academia de Belle Arte. During this era, however, the Academy would never accept the work of a female artist. The Academy was worried that women in the program would be distracting to the males studying there. Casioli insisted that Mary’s work be shown, and he submitted a few pieces anonymously. One of her black-and-white drawings won first prize while a drawing of the heads of peasants also took a prize.

When the Academy learned of the artist’s true identity, they wanted to cancel the prize but the press took up the subject. Historian J. P. Young wrote: “It ended by the young girl receiving her fairly earned prizes and honor and opened the door of the academy to women.”

Solari was an American woman artist making Italian art history and changing art education for all women. As Young wrote: “(I)t was found that men and women stimulated one another to their best. So the Academy remained co-educational, made so by a young Memphis woman through the real merit of her work.”

In 1890, she received her Master of Arts degree and entered the Beatrice Exposition, which was open to women and had 1,000 entrants. Solari won the highest awards in watercolor. The diploma and letters of merit entitled her to teach art in the government schools – fulfilling another of her goals.

After receiving her Academy degree, Mary returned to Memphis in 1892 and she continued to be a face of change for gender equality. In 1893, she broke another barrier – she was the only woman and Southerner on the Chicago World Fair’s Board of Judges for the Fine Art Department.

In 1897, at the Tennessee Centennial Exhibition in Nashville, she was in charge of the art exhibit in the pyramid-shaped building Memphis built to exhibit its wares. She also won prizes for oil painting, watercolor, crayon, landscape and antique collection. Her pictures hung in both the Memphis pyramid and the Parthenon built by Nashville to house general arts exhibition.

Mary opened a school of fine arts in the Randolph Building where she taught oil, water color, pastel and tapestry painting.
She began a series of Lenten Art Salons “with a view to gather the different choice flowers in literature, music and art…in Memphis.”

She became an advocate for those without a voice. She lectured on prison reform, juvenile offenders and industrial training in schools. She became an outspoken critic of horrid conditions at the City Hospital, erected for steamboat transients. She lectured on “If Christ Should Come to Memphis and Visit the Hospital What Would He See?” She sparked the interest of city officials and the press – a new hospital building was the result.

During World War I she lectured to sell war bonds to Memphis’ Italian community.

In her last years, she spent much of her time on her 176-acre farm on the Wolf River on the Raleigh Road east of National Cemetery. She raised Berkshire and Poland China hogs, chickens and Kentucky horses. There she was surrounded by her collection of treasures: antique tapestries including one of Abraham sacrificing Isaac; 14th century gold candelabra, Florentine lace, Etruscan curiosities and a set of silver from India.

In 1928, a year before she died, Mary made yet another contribution to the future of Memphis. She donated her home, art collection, and land, valued around $150,000, to Christian Brothers College. To this day, the school houses her art collection, and the sale of her home and land provided funds to purchase the land upon which Christian Brothers University sits today on Central Avenue in Midtown Memphis. Tennessee Gov. Malcolm Patterson called her gesture “a permanent investment in the interest of good citizenship.”

Mary Magdalene Solari changed the narrative of women’s contributions to society. She paved the way for women in the world of art, and she was a voice for change in the Memphis community.