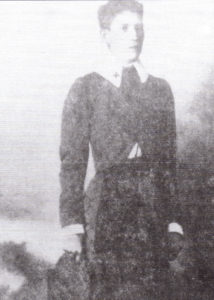 During one night’s ordeal in Cuba, she delivered a baby, performed a circumcision, a tonsillectomy and an amputation (all with the same kitchen knife), and passed her own kidney stones. She was Lena Angevine Warner, a woman whose story demands to be told.

Lena Angevine was born in Grenada, Mississippi, in 1869, the daughter of a prominent Mississippi couple. In 1877 a yellow fever epidemic swept through the area, killing everyone in the Angevine household except eight-year-old Lena. Her grandmother enrolled her in a boarding school in Memphis, where her interest in health care was nurtured by a teacher who had been a friend of Florence Nightingale.

Over her grandmother’s protests, Lena entered the first nursing school in Memphis in 1889. According to The New York Times and the American Journal of Nursing, she was the first graduate nurse in Tennessee and, probably, in the South. She took a post-graduate course at Cook County Hospital in Chicago and was married briefly to E.C. Warner. In 1897 she founded the Tennessee College of Medicine and Nursing.

When the Spanish-American War broke out in 1898, President McKinley called for volunteer nurses. Lena led a team of Memphis nurses to Cuba. “Every kind of epidemic — cholera, malaria, smallpox, yellow fever and bubonic plague — gripped Cuba,” she said later. Her outstanding nursing and organizational skills resulted in being named chief executive nurse of the island. That meant she became the first and the only woman officer in the U.S. Army.

Besides her nursing talents, Lena was the designer of the first official nurse’s uniform, a Zouave jacket in blue over a waistshirt of white linen and a long navy skirt.

Because she had been exposed to yellow fever as a child, she was considered to be (erroneously, as it turned out) immune to the disease. After the war was over she was invited back to Cuba to be the nurse in charge of yellow fever experiments. Working with Dr. Walter Reed and a distinguished medical staff, Lena was there when experiments proved that the female stegomyia mosquito carried the disease. Several of the medical team, including Lena, became ill with yellow fever during the experiments.

Returning to Memphis, she began a long career in public health and community service. She was a founder of the Tennessee Nurses Association and the Tennessee Health Association. She organized Red Cross chapters and served as the state chairperson for the Red Cross Nursing Department from 1910 to 1932.

Lena moved to Knoxville in 1916 and fought epidemics of cholera and influenza throughout Appalachia. She was a tireless fighter for better sanitation and public health. She published hundreds of books and pamphlets on health concerns as the director of rural health and sanitation for the University of Tennessee Agricultural Extension Service from 1916 until her retirement in 1946 at age 79.

During this time, an incident occurred which characterizes Lena’s concern for all living creatures. While leaving a Home Demonstration Club meeting one day, Lena saw a man beating two horses that were struggling to pull a heavy load. She stationed herself in front of the animals until the cursing man removed part of the load.

Lena Angevine Warner died in 1948. She lived a life of “firsts” yet few people today know her name. Although she was profiled in The New York Times and was a colleague of Dr. Walter Reed, Lena was more concerned about being useful than being famous. At her death she was entitled to be buried at Arlington National Cemetery, a place reserved for heroes. Following the custom of her life, she was brought home to Memphis to be buried at Elmwood Cemetery near her family.