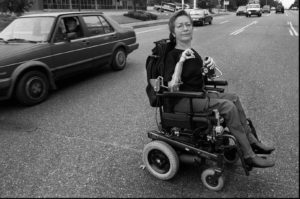 In an age filled with people searching for the easy way out, determination can be hard to find. But don’t suggest the easy way out to Deborah Cunningham. And don’t ever tell her to give up.

Afflicted with polio at the age of 6, Deborah refuses to use the disease as an excuse and she tries to help others do the same. As the executive director for the Memphis Center for Independent Living, it’s Deborah’s job to fight for the rights of the disabled, but it is her determination that causes those fights to go way beyond the call of duty.

In 1990, Deborah, a volunteer with ADAPT (American Disabled for Accessible Public Transportation), along with other members of the group, began a protest against the Malco theaters. What Deborah’s group wanted was simple: seating in Malco theaters that allows people in wheelchairs to sit with nondisabled companions and still have a good view of the screen. When a letter sent to the president of the company was ignored, Deborah’s determination would not let her back down. She led the group in a 45-minute protest at 7 p.m. on a busy Saturday night. That effort got the group an audience with Malco’s president.

In 1995, Deborah decided it was high time for the Mid-South Fair to make the event more accessible. She helped pushed fair officials to move more quickly on their promised renovations on the event to bring it up to federal standards of accessibility.

Her determination has continued to shine in recent years. After feeling that the main effects of polio were behind her, Deborah discovered a few years ago that she would not be so lucky. She, like many polio victims, was diagnosed with post-polio syndrome. But instead of using this recent affliction as a reason to give up, Deborah used it as another reason to fight. Under Deborah’s direction, the Center for Independent Living started a monthly post-polio patient support group and disseminates current information on the subject.

Whether it is accessibility or other issues of concern to people with disabilities, Deborah is never afraid to speak her mind and never afraid to advocate for what is right. She is not afraid of what others think, and she is determined to make sure the playing field is level for everyone.

Deborah continues to press for accessibility as required by law in local restaurants and other facilities and adequate transportation services from Memphis Area Transportation Authority.