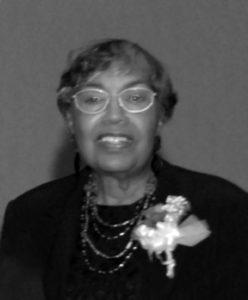 In 1963, Birmingham, Alabama was one of the most violent, severely segregated cities in the south. There were sit-ins at lunch counters and kneel-ins on church steps. Protesters who marched that spring were met with policemen and dogs. And yet that is where, due to work opportunities for beloved husband and father Harry, Modeane, and their five children found themselves living.

At that time Modeane’s main responsibility was caring for her family, no small task anytime. In those violent days, Harry Thompson had been pulled over and harassed by the police. The men in their neighborhood formed a group and assigned times to patrol during the night to keep their families safe.

One September Sunday morning Harry took the four older children to church while Modeane stayed home with the baby. Listening to the radio, Modeane heard that the Ku Klux Klan had bombed the Sixteenth Street Baptist Church. She knew her family was near that location and was panic stricken until they returned home safely. Others were not so fortunate; four little girls were killed in the bombing and by the end of the day 2 teenagers were dead.

After listening to the radio one day three-year-old Arnold said, “A Negro’s going to get you, Mommy.” Out of frustration Modeane wrote an article that was published in Redbook magazine in 1964. The article, titled “What Can We Tell Our Children?,” vividly describes the dual role of African American mothers during that time. Her goal was to create an atmosphere that encouraged the children to grow up to be confident American kids who believed they could be anything they wanted to be. Her challenge was to explain to them the painful reality of the institutional racism they would have to face.

There were two articles in that issue: Modeane’s, which had her by-line and showed a picture of her children at a birthday party, and one by a white mother, by-line anonymous and a blank rectangle for illustration.

The Thompson family returned home to Memphis at the beginning of the Sanitation Strike and Modeane intensified her efforts to work to effect community change. She immediately affiliated with causes that were dedicated to developing communication and understanding. She was an active member of the Rearing Children of Goodwill Workshop, Dialogue in Black and White and the Panel of American Women, a group that spoke publicly about their own biases and prejudices as a way to help others recognize prejudice in themselves. She was a founding member of the Vollintine-Evergreen Community Action Association, which helped stabilize the neighborhood during white flight.

Modeane began her 21 years with Family Services in 1971. Using the degree in Social Work she received from Lemoyne-Owen College, she counseled unwed teenagers, conducted family education groups, and worked with many special projects.

As a member of Alpha Kappa Alpha Sorority, the Coalition of 100 Black Women, Shelby County Interfaith, Chair of the Action Audit for Change Committee of the YWCA of Greater Memphis and a lifetime member of the NAACP other organizations her advocacy has continued.

In 2006, Modeane was one of six national recipients of the first “Everyday Freedom Heroes Award” from the National Underground Railroad Freedom Center in Cincinnati, Ohio.

Modeane is modest about any recognition. She says she just does things she thinks everyone should do.