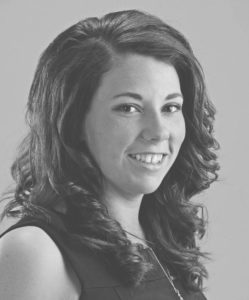 Chelsea Boozer was a student journalist and editor in chief of the University of Memphis Helmsman when she began working on stories about unreported rapes on the campus. The resulting struggle for access to public documents and to secure students’ safety led to a battle that threatened the newspaper’s funding and Chelsea’s reputation.

Her steadiness during it all led Candy Justice, faculty advisor of the Helmsman, to say: “Nobody can take her courage away as far as I’ve seen.”

Ironically, Chelsea began her career as a nervous junior high student who liked to write. And she was good. One of her teachers in Marion, Arkansas, even accused her in seventh grade of letting her mom produce a story for her advanced literature class. Her mother had to go attest that the work was actually Chelsea’s!

The journalism bug bit this self-described “news nerd” early – she was editor of the junior high school paper, took a journalism class in high school and edited that newspaper senior year.

She crossed the river to major in journalism at the University of Memphis where she became deeply involved in journalism organizations and the Helmsman while also maintaining strong grades. She was managing editor January to May 2012 and editor in chief May to December 2012 when she graduated first in the College of Communications.

Her drive for the truth led to repeated fights with the university for access to public documents – a right protected by the federal Clery Act which requires universities that receive federal financial aid to disclose information on crimes that occur on or near campus.

She angered faculty and Student Government Association leaders with a three-part series that documented free tuition paid for SGA members and the money-losing football program. Invited to an SGA meeting, she was publicly chastised by the SGA president who got a standing ovation for his remarks, including the dean of students.

But the hostility rose to new levels in March last year when the Helmsman began to write about rape.

First there was a battle for records related to a November assault incident that university officials had not disclosed. Then the student journalists found out about another alleged rape that had happened in March – but again it had not been disclosed. It involved a registered sex offender who was posing as a student and living illegally in university housing.

Chelsea as managing editor and her reporter on the rape story met with campus Police Services and interviewed students at the housing complex – and later faced police reports alleging that they made threats, were rude and hostile, claims Chelsea disputed. In an open letter to Police Services, Chelsea criticized the department for failing to notify students of the March rape.

But when director of residence life and an official from Judicial Affairs met with the newspaper’s faculty advisor, they said there had been discussion of arresting Chelsea. However the Judicial Affairs officer said the police reports – alleging that Chelsea made a scene and refused to leave the campus police office – “didn’t ring true” so there would be no arrest.

The harassment – the pressure brought on Chelsea for doing her job – outraged faculty, alumni and national journalism organizations.

When the Student Activity Fee Allocation Committee notified Justice that the Helmsman would receive $50,000 instead of the $75,000 it had the prior year or the $80,000 requested – Helmsman staff and some journalism professors believed it was based on the paper’s critical reporting about the university. She and her faculty advisor alleged the cuts were a First Amendment violation as SGA members retaliated for her work. The allocation committee consists of four university administrators and three students including the SGA president and vice president.

The funding cut infuriated alumni and inspired a website for donations to “Free the Helmsman.”

A university investigation agreed with the Helmsman’s claim and the funding was restored. Last week university President Shirley Raines announced 2013-2014 funding will remain at $75,000.

Chelsea has won numerous awards and was recognized by Memphis Magazine in October 2012 as one of five women who make a difference. She is now is a reporter at the Arkansas Democrat-Gazette.

Student Press Law Center director Frank LoMonte called Chelsea “Mike Wallace with molasses syrup – disarming but deadly.” She says her courage came easily “because I knew we were on the truth side and doing something important and really right.”