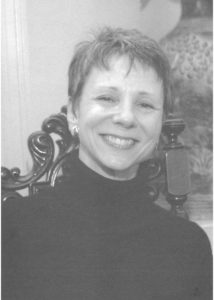 As a bright preschooler growing up in Detroit, Mickey Babcock was reading by the time she reached kindergarten. She quickly surpassed her primary school classmates and skipped the third grade.

“In so doing, I paid a social price,” she said. “I never ‘fit in’ with the other girls, which I suspect has always made me highly sensitive to the plight of others who don’t fit in for whatever reason.”

Mickey has combined her sensitivity with drive, energy and vision to become a successful entrepreneur, an encouraging mentor, a quiet philanthropist and a behind-the-scenes organizer of projects to help women and girls.

Shunning the spotlight, Mickey’s style is to bring others together for good. She rarely carries the title of ‘chair’ or ‘president,’ but frequently earns the shared title of founder or organizer. She is among the few who are there at the beginning, taking chances and encouraging others to do the same.

Mickey’s inspiration comes, in part, from her maternal grandmother, Mary Scarb Lewandowski, who left her native Poland alone at the age of 16. She asked for her dowry, booked passage to America, and crossed the Atlantic for a new life in Detroit.

While Mickey’s grandmother was a role model of courage and vision, other women she observed seemed to lack the strength to improve their lives. She wondered: Why do some women find the courage to change, while others remain in seemingly unbearable situations? Mickey’s accomplishments are the result of her efforts to help women find the support they need to improve their lives.

In 1995, she was instrumental in creating the Women’s Foundation for a Greater Memphis. She secured donations and helped develop a network of supporters. Four years later, she demonstrated her commitment to the foundation when she agreed to serve as interim executive director for several months.

Her work with the Women’s Foundation led to new connections and more projects. She was a founding board member of the RISE Foundation, which helps women in public housing improve their lives through economic self-sufficiency. She also became a member of the Memphis Housing Authority board. As a successful business owner, Mickey provided support for the creation of the Opportunity Banc, a micro-loan program at MIFA.

Today, Mickey’s vision and encouragement extend west to Wyoming where she and her husband, Joe McCarty, spend several months each year. Mickey founded a nonprofit organization with a vision “to see communities across Wyoming actively valuing and respecting the roles of women and girls, and to see Wyoming women and girls continually elevating those roles in their communities.”