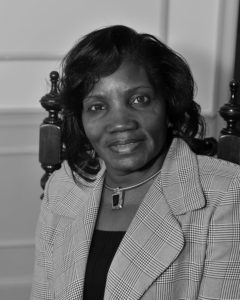 Always highly motivated, Melvena Leake taught school for 30 years, worked as a volunteer probation officer, and sold real estate on the side. She planned to travel when she retired but instead fate and a vision of making a difference in the lives of women just released from prison led her on a different journey.

After retiring, Melvena Leake began visiting women in prison as part of her church’s ministry. She found that many of the women were not first-time offenders but had returned to prison after being released. She listened to their stories and asked questions of her own.

“How many times have you been here? Why do you keep coming back?” she asked. And she started researching recidivism. She found that having a place to go upon release was essential in staying out of jail. And she dreamed of a halfway house that could be that place.

Melvena and her husband postponed their travel plans and she looked for funding to create that house. On December 7, 1999, Karat Place, Inc., a grassroots, non-profit residential rehabilitation program for homeless women ex-offenders, was chartered. It received its 501(c)(3) status in May 2000 and Melvena began accepting in-kind donations and planning operating procedures. In January 2001, Karat Place became an official service provider.

Karat Place is more than a residential facility. Its goal is to prepare women for living-wage employment and to help improve parenting skills so that these women may be successfully reunited with their children. Melvena helps them access medical care and teaches job interviewing and life skills so that they learn to share a vision of a life of their own. The program is called START, Special Transitional Actions to Restore Talents.

Once employed, the women contribute 30% of their wages to the program and save 30%. They apply for food stamps to cover the costs of food. They shop, plan and prepare balanced meals, and do the cleaning. Coming from chaotic past lives, some residents have never before made so much as a grocery list. Children visit on weekends.

Most participants are self-sufficient within the first six months but can stay up to two years.

Karat Place started with 4 beds. The second location had 12, and the current facility has 16.

Karat Place is proud of its first 10 years. Over 200 women have been reunited with their families, have found good jobs, and have stayed out of jail. The hotel industry has been especially helpful, providing jobs in housekeeping. Karat Place “graduates” are supervisors at both the Marriott and the Madison Hotel.

Funding continues to be a challenge. Melvena puts together money from churches, foundations, corporations, individuals, and her own savings. (Remember those travel plans?) She takes no salary for herself.

Hers is a purpose-driven life. The program isn’t faith-based, but that’s how she made it. “What God ordains, he maintains,” she says. She’s quick to point out that she couldn’t do this all alone. It is the work of many hands; volunteers, board members, those who donate both in-kind and in cash.

Asked how she achieves her high success rate, she says that the women know that she believes in them. She’s strict. She knows that some may laugh at her ways, but they all know she cares. Many have returned to thank her.

The age-old measure of value is gold, and thus the name Karat Place. Melvena’s belief in these women and her vision of transforming broken lives into something of beauty and value has become a glowing reality.