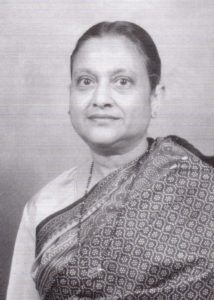 Since 1969 Astrid Braganza has worked with women imprisoned in the Shelby County Jail. Her vision has been, and still is, more humane treatment for these women and an opportunity for them to rehabilitate themselves.

Her volunteer work is done inside the jail by personal contact and by providing opportunities for worship and personal enrichment. It is tiring and demanding but she has never given up on the imprisoned women who need help.

Astrid, a native of India, was already there when Church Women United in the early 1970s documented two appalling problems that were being ignored by the local justice system. Astrid later described them: those dragging, empty hours in which women had nothing to do but stare at the bars and walls of their cells, play poker and dice, or for the more energetic, start squabbles that often degenerated into brawls.

A second problem she identified was ironic in the region that prides itself on being with the so-called Bible Belt: the women were denied their basic human right to worship God in any formal way.

From worship services held in a wide hallway on the fifth floor of the old county jail, to the disappointment of seeing women barred from a beautiful inmates’ chapel at the Penal Farm, and finally to services in a stark, simple chapel in the Criminal Justice Center, Astrid Braganza has held true to her vision. Many times she met with resistance and resentment from jail officials. She never let them stop her, however.

In our society, women behind bars are nearly invisible. Astrid Braganza has demonstrated through her vision and work with the criminal justice system that a better life for these women is possible.