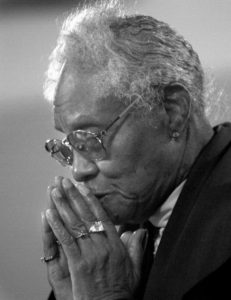 One of the quiet heroines in Memphis is Elizabeth Toles, a former schoolteacher who has been steadfast in her support for others for all of her 79 years. During her 32 years in the classroom, before retiring in 1975, she was highly regarded for her kindness, her emphasis on excellence, and her active community service.

Elizabeth was born blind and left motherless at three weeks of age when her mother died. Her sight in one eye returned at age nine and she has proceeded to spend a lifetime teaching others how to overcome obstacles. Elizabeth has received numerous awards, citations, and recognition from all walks of life. In 1969, during the days of heightened racial tensions, she donated half a commercial building at 1277 Mississippi for the Memphis Police Department to use as a community service center – because she saw the need.

She currently pastors the Church of Good Fellowship, which she began in 1985. She strongly advocates tithing so much that she gives 10 percent of her church’s monthly income to help college students. Her church donates another one percent of its monthly revenue to MIFA to help feed the hungry. She teaches Bible study at King’s Daughters and Sons Home and sponsors a Thanksgiving dinner there annually.

The praise for Elizabeth’s good works is voluminous. She has been written about in national publications and received recognition from mayors, governors and the U.S. Congress.

She has helped send young people to college, provided stability for children whose families were in crisis, and given money anonymously to help many people – young and old – with their dreams. At her church’s Pastor Appreciation Day, one young woman said, “When I was a little girl, I thought Elizabeth Toles was a millionaire. She helped everybody!”

Her life has been an example of steadfastness – devotion to God and devotion to helping others.