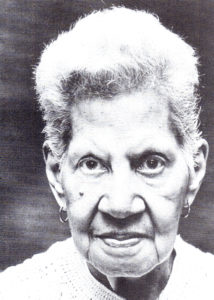 When Althea Banks Price arrived in Memphis in 1941 she was the young wife of a new dean at LeMoyne College and the mother of a four-year-old son. She hated leaving Tuskegee Institute’s cultural environment but she quickly settled into a different life and began pursuing the college degree that her working class family had been unable to afford.

After two years in the Bluff City her husband, Hollis Freeman Price, became the first black president of LeMoyne College. The young mother, “First Lady,” and teacher had many responsibilities. Until the passage of public accommodations legislation, no restaurants or hotels would accommodate integrated groups visiting the college so Althea served as their hostess in Memphis.

She cared for her parents until their deaths, earned her Master’s degree in guidance at Memphis State University and returned to Booker T. Washington High School to guide hundreds of students to outstanding educational opportunities all over the nation.

She joined the graduate chapter of Delta Sigma Theta Sorority and the Memphis Chapter of Links, which along with her membership in Second Congregational Church of Christ provided her with many opportunities for community service. She served on the Better Schools Committee, Memphis Volunteers for Youth Counseling, St. Peters Home, and worked in inter-racial and interdenominational groups. Often she and Dr. Price were the only blacks at local gatherings. She also supported the NAACP, the Memphis Urban League and the YWCA, to name a few.

Althea has endured the humiliation and spiritual erosion of segregation, the premature separation from her only child so that he could be educated outside a segregated system, and lived the life of a public “Super Woman” long before that term was born. She struggled through the conflict and confrontations of the ‘60s and now, despite declining health, receives a steady stream of visitors from all walks of life.

We honor Althea Banks Price for her steadfastness, which changed the lives of those individuals with whom she came in contact, and the city in which she has lived.